Following the chart below – a person might have average intelligence, have little interest in other people, use limited verbal language, experience intense self-stimulatory behaviors such as hand-flapping, under-react to pain and over-react to sounds, have very good gross motor skills, and have weaknesses in fine motor skills. These symptoms may vary widely from person to person. 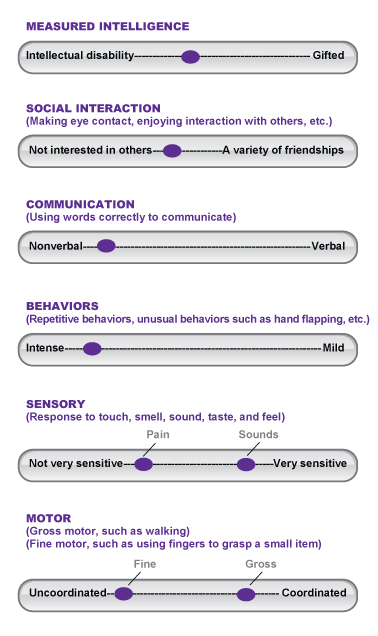 Autism spectrum disorder (ASD) is a developmental disability caused by differences in the brain. Scientists do not know yet exactly what causes these differences for most people with ASD. However, some people with ASD have a known difference, such as a genetic condition. There are multiple causes of ASD, although most are not yet known.

There is often nothing about how people with ASD look that sets them apart from other people, but they may communicate, interact, behave, and learn in ways that are different from most other people. The learning, thinking, and problem-solving abilities of people with ASD can range from gifted to severely challenged. Some people with ASD need a lot of help in their daily lives; others need less.

ASD begins before the age of 3 and last throughout a person’s life, although symptoms may improve over time. Some children with ASD show hints of future problems within the first few months of life. In others, symptoms may not show up until 24 months or later. Some children with an ASD seem to develop normally until around 18 to 24 months of age and then they stop gaining new skills, or they lose the skills they once had. Studies have shown that one third to half of parents of children with an ASD noticed a problem before their child’s first birthday, and nearly 80%–90% saw problems by 24 months of age.

It is important to note that some people without ASD might also have some of these symptoms. But for people with ASD, the impairments make life very challenging.

Social issues are one of the most common symptoms in all of the types of ASD. People with an ASD do not have just social “difficulties” like shyness. The social issues they have cause serious problems in everyday life.

Typical infants are very interested in the world and people around them. By the first birthday, a typical toddler interacts with others by looking people in the eye, copying words and actions, and using simple gestures such as clapping and waving “bye bye”. Typical toddlers also show interests in social games like peek-a-boo and pat-a-cake. But a young child with an ASD might have a very hard time learning to interact with other people.

Some people with an ASD might not be interested in other people at all. Others might want friends, but not understand how to develop friendships. Many children with an ASD have a very hard time learning to take turns and share—much more so than other children. This can make other children not want to play with them.

Each person with ASD has different communication skills. Some people can speak well. Others can’t speak at all or only very little. About 40% of children with an ASD do not talk at all. About 25%–30% of children with ASD have some words at 12 to 18 months of age and then lose them.1 Others might speak, but not until later in childhood.

People with ASD who do speak might use language in unusual ways. They might not be able to put words into real sentences. Some people with ASD say only one word at a time. Others repeat the same words or phrases over and over. Some children repeat what others say, a condition called echolalia. The repeated words might be said right away or at a later time. For example, if you ask someone with ASD, “Do you want some juice?” he or she might repeat “Do you want some juice?” instead of answering your question. Although many children without an ASD go through a stage where they repeat what they hear, it normally passes by three years of age. Some people with an ASD can speak well but might have a hard time listening to what other people say.

People with ASD might say “I” when they mean “you,” or vice versa. Their voices might sound flat, robot-like, or high-pitched. People with an ASD might stand too close to the person they are talking to, or might stick with one topic of conversation for too long. They might talk a lot about something they really like, rather than have a back-and-forth conversation with someone. Some children with fairly good language skills speak like little adults, failing to pick up on the “kid-speak” that is common with other children.

Many people with ASD have unusual interest or behaviors.

Examples of unusual interests and behaviors related to ASD:

Repetitive motions are actions repeated over and over again. They can involve one part of the body or the entire body or even an object or toy. For instance, people with an ASD might spend a lot of time repeatedly flapping their arms or rocking from side to side. They might repeatedly turn a light on and off or spin the wheels of a toy car. These types of activities are known as self-stimulation or “stimming.”

People with ASD often thrive on routine. A change in the normal pattern of the day—like a stop on the way home from school—can be very upsetting to people with ASD. They might “lose control” and have a “melt down” or tantrum, especially if in a strange place.

Some people with ASD also may develop routines that might seem unusual or unnecessary. For example, a person might try to look in every window he or she walks by a building or might always want to watch a video from beginning to end, including the previews and the credits. Not being allowed to do these types of routines might cause severe frustration and tantrums.

Some people with ASD have other symptoms. These might include:

People with ASD might have unusual responses to touch, smell, sounds, sights, and taste, and feel. For example, they might over- or under-react to pain or to a loud noise. They might have abnormal eating habits. For instance, some people with an ASD limit their diet to only a few foods. Others might eat nonfood items like dirt or rocks (this is called pica). They might also have issues like chronic constipation or diarrhea.

People with ASD might have odd sleeping habits. They also might have abnormal moods or emotional reactions. For instance, they might laugh or cry at unusual times or show no emotional response at times you would expect one. In addition, they might not be afraid of dangerous things, and they could be fearful of harmless objects or events.

Children with ASD develop at different rates in different areas. They may have delays in language, social, and learning skills, while their ability to walk and move around are about the same as other children their age. They might be very good at putting puzzles together or solving computer problems, but they might have trouble with social activities like talking or making friends. Children with an ASD might also learn a hard skill before they learn an easy one. For example, a child might be able to read long words but not be able to tell you what sound a “b” makes.

Children develop at their own pace, so it can be difficult to tell exactly when a child will learn a particular skill. But, there are age-specific developmental milestones used to measure a child’s social and emotional progress in the first few years of life. To learn more about developmental milestones, visit “Learn the Signs. Act Early,” a campaign designed by CDC and a coalition of partners to teach parents, health care professionals, and child care providers about early childhood development, including possible “red flags” for autism spectrum disorders.

AP searches the web for you to find the best autism related content and the latest headlines. AP updates every half hour, so as soon some autism news is dropped somewhere on the web it pops up on Autism Plaza.

AP will be adding resources continuously. Feel free to suggest your favorite news, blogs and other channels through the contact form.

AP will grow over time into a huge library of news, scientific papers, blog posts, videos, podcasts and much much more. It will be a Plaza of Autism related information.

Autism Plaza is created by an #ActuallyAutistic creator. Don't forget to follow AP.

Back to top button
Close
Popular Posts
Most Commented
Close